Political analysis of transitional political systems in Central and Eastern Europe is no less interesting than 30 years ago. The transit countries differ considerably in their progress after slightly over 30 years of transformation, i.e. in the early 1990s, the processes of Central European democratic renaissance were the most urgent, whereas, in the early 2020s, there arises the issue of democratic regress in these countries. To refer to transit countries, we will resort to the traditional terminology, such as “post-communist countries”, “post-socialist countries”, and “post-Soviet countries”. The social, and even more so, the political heritage of the “socialist model” has left nearly nothing on the political panorama of modern European countries. However, the electoral processes in the former “socialist commonwealth” countries point at a certain degree of polarization in society and hence confrontation in the political system.
Undeniably, the Slovak Republic is amongst such countries. On the one hand, the country noticeably progressed in its transition from the ex-authoritarian state model to a nationally-based democratic republic. However, Slovakia has repeatedly tested the strength of the new democracy resulting from the painful “divorce” from the Czech Republic, the era of “popular populism”, the complexity of Euro- Atlantic integration, a threat of power usurpation, and a deep political crisis of recent years. The President of the Slovak Republic happens to be gradually becoming one of the key figures in the political system. The head of state is building up his political potential and, in modern conditions, is quite distant from the influence of large party groups and their interests. With few exceptions, the electoral struggle for the presidency has always been fierce.
In the present study, we have attempted to provide a political analysis of the significant presidential election in the Slovak Republic. We prepared a broad analysis of the election campaigns’ peculiarities and presented the voting results in the election of all Slovak Presidents, elected by popular vote. Some aspects of the study, such as electoral fragmentation in the regions or communicative markers in the election of Slovak Presidents, have already been published in scientific journals. This monograph is a summary of our previous and current research efforts to describe the institutional design of the President’s office, the communication tools and electoral markers typical of the main presidential candidates, as well as the regional electoral cleavages formed after the presidential elections.
We frankly believe that the proposed monograph will be of interest and use for the reader. 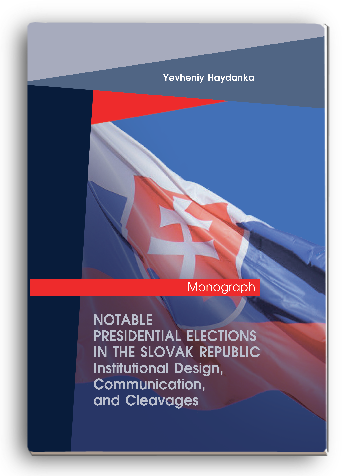